The Rejang dance is one of Bali’s most beautiful and visually stunning; featuring a troop of young, fully decorated girls, it is a dance of elegance and grace.

In the isolated communities of Karangasem, life goes on much as it has for centuries. Of course, now, many of the young leave home to take a job down south and bring in some much needed cash for their family, but they will always return for the big events. 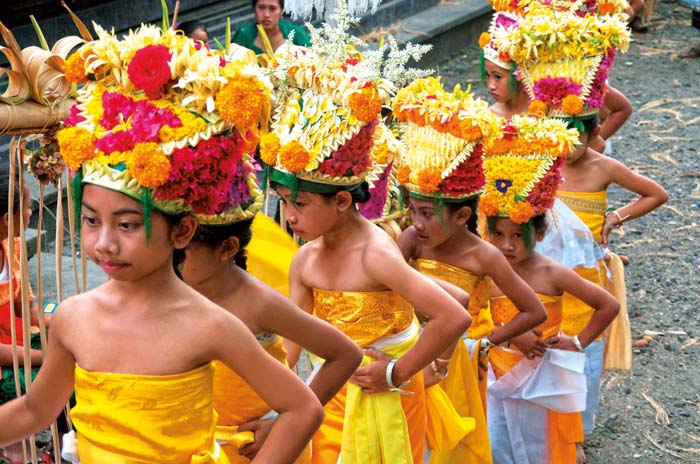 Recently, we heard a whisper that there would be a big ceremony in the backwoods of Sidemen, so after making intricate arrangements, we headed out to find the village. This area is far off the tourist trail, but the local photographers, always after a good story and the ultimate Bali picture, keep their nose to the ground for whispers of any special event. The secrets are guarded jealously, as less is best when photographing special events! 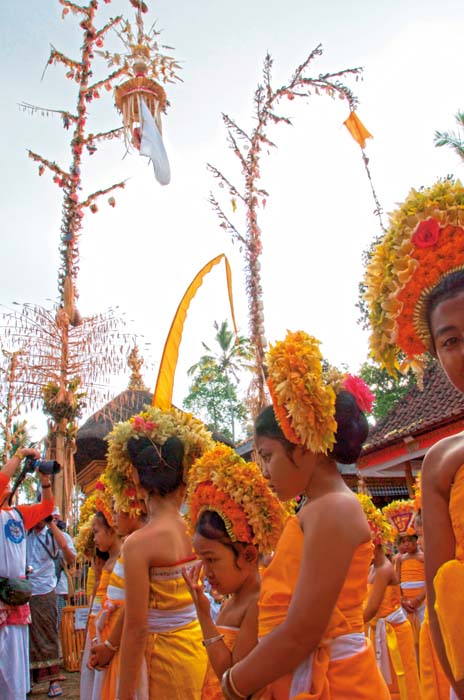 When we arrived, half of the Denpasar Photo Group were already there. At least ten or twelve were standing about, cameras in hand, huge stocks of telephotos in their bulging backpacks. The Rejang has always been one of the most photogenic dances out there…

After stampeding after a young girl or two, and photographing her camera club style, the photo hounds went bounding up to the temple, ready to catch all the action, and always on the look out for the young and pretty, to get that award wining shot.

The ceremony started in earnest, gamelans crashing, and the beautifully decorated Rejang dancers, who ranged in age from about 8 years old to late teens stood their ground. Calm and dignified, they faced the cameras pointed at them with abject poise and dignity, smiling for the favoured ones.

Surprisingly, a small group of tourists were there, from a hotel in Candidasa. They were the lucky ones, as news rarely travels as far as the tourist centres. 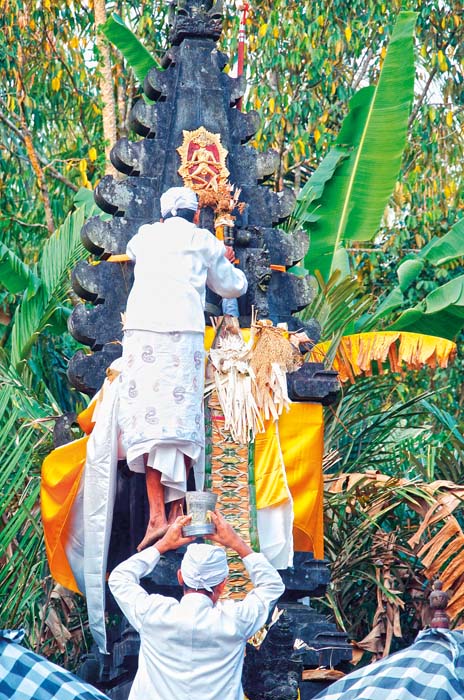 Events went on. The girls paraded around the temple accompanied by the gamelan players, people prayed, the priests were kept busy dispensing blessings while they carrying sacred ritual objects to secret places. Esoteric barely covers it.

A Balinese ceremony is always multi layered, with many things happening at the same time. Even the participants are barely aware of all the rituals, and for us rank outsiders, we were, I have to admit, pretty clueless. After attending lots of ceremonies, certain patterns emerge, and some rituals become recognizable but there are always more.

The parading was completed with a sacred Kris dance and the middle aged man was quite at one with the spirits. Energy was running high, the girls sat calmly and quietly while what appeared to be a demented dancer rushed between them, sometimes taking bites of their flowery headdresses in his mouth, before rushing off again, Kris in hand. 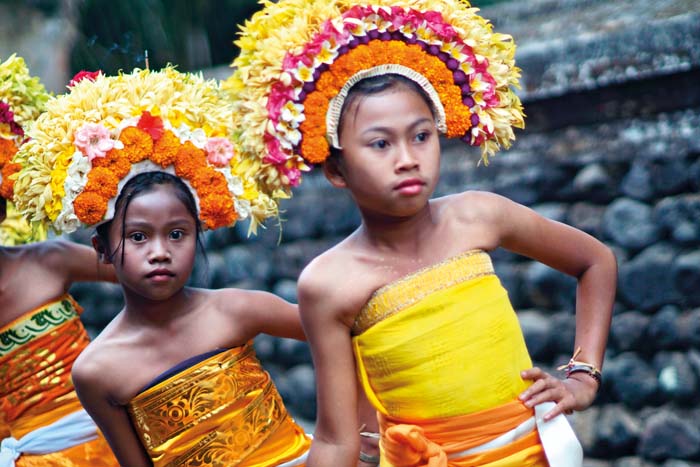 The energy levels became ever higher, and then as suddenly as he began, he stopped, collapsing in a spent heap in front of a Priest bearing bottles of a special holy arak. A few drops of arak and a splash with water seemed to revive him, drawing him out of the trance he had fallen into and that was the end of the celebrations. 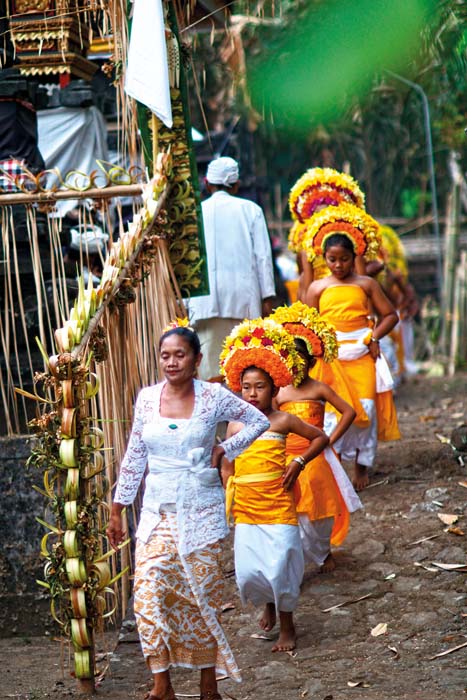 With the temple cleansed, and the people spiritually charged for the next few months, it was time to head for home and the beautiful old temple emptied in minutes.

It was the end of just another day in Karangasem. 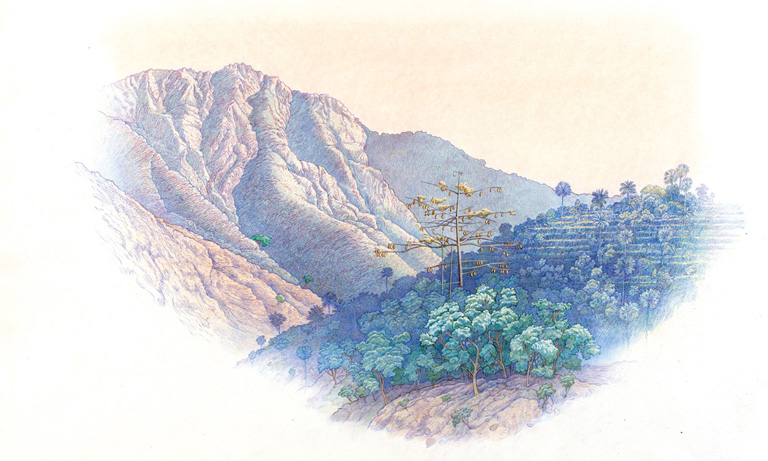 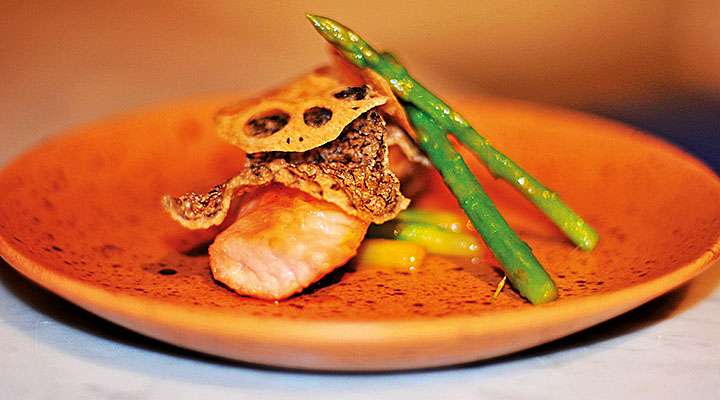 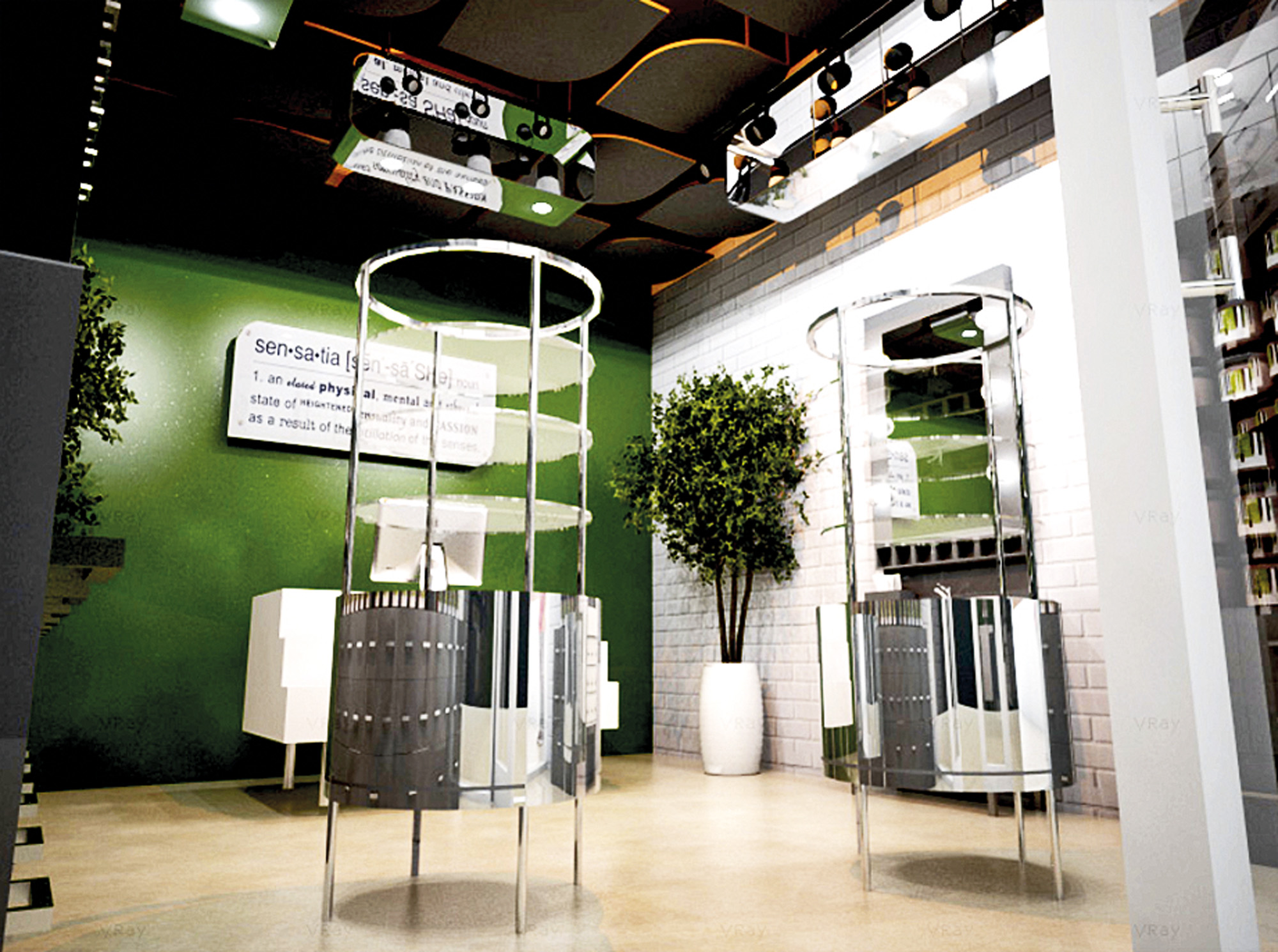 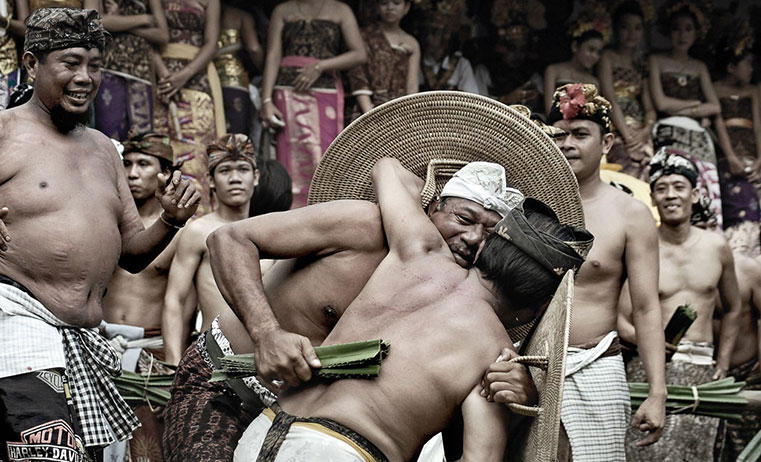 Tenganan Turns it On