The winds of change are upon us, and 2020 is the benchmark. A revolutionary new generation has dawned upon Bali that is determined to alter the future course of the island. Empowered by the 21st-century digital creative economy, this is a thriving youth ‘movement’ compelled by a strong sense of personal and collective enquiry. One of the trailblazers is the multi-talented Balinese activist Putu Marmar Herayukti.

With over 126,000 Instagram followers, and increasing, Marmar has quickly become a role model to Balinese youth during a critical turning point in the development of Balinese society.  “I began campaigning in 2014 at a popular Denpasar ogoh-ogoh competition,” Marmar told me. “My platform, to use only sustainable traditional materials in the making of these culturally significant artworks.”

Frightening, demonic statues, the ogoh-ogoh are created for the Ngrupuk ceremony, held on the eve of Nyepi day in Bali. The dramatic, often chaotic parade is essential to purifying villages and the natural environment of spiritual pollutants emitted from the activities of living beings (especially humans), before welcoming in the Balinese new year.

“The campaign’s objective is to stop the use of styrofoam that has a detrimental physical and environmental impact and has been increasingly adopted by youth groups in the making of these statues. I support eco-friendly ogoh-ogoh and the return to the tradition of ngulat (weaving techniques). The battle began in the local Denpasar banjars (village hamlets), and then the message spread out via the competition,” said the talented musician and tattoo artist.

“My friends and I had experienced the negative physical side effects, fevers, headaches and sleeplessness from working with styrofoam. These problems inspired us to research the Internet finding data from health experts that confirmed our physical ailments,” said Marmar who was born in Banjar Gemeh, Dauh Puri Kangin, Central Denpasar in 1983. He pointed out that he does not promote his name, yet publicises the campaign’s positive values carefully. “I facilitate workshops teaching youths how to make the particularly challenging aspects of the sculptures from natural materials. I am self-funded and do not accept money from the government or the commercial sector. In making this stand, I inadvertently became a youth role model.”

His public image on the rise, many opportunities have since flowed to Marmar. Recently he connected with broader national and international audiences, featuring in panel discussions at the 2018 & 2019 Ubud Readers & Writers Festival. He often addresses youth communities around Denpasar, advocating passionately that Balinese traditions are the core principles and the foundations of how the younger generations can develop and evolve. “I express my opinions, yet also say to them that they do not have to agree with me. I am open to their criticism,” Marmar said. “I wish to inspire the leadership groups of the next generations to be empowered from a place of wisdom and integrity.”

Marmar exhibited his 2019 artwork, ‘Pejuang Adat’ in Bali’s largest contemporary art exhibition held within the past two years. Displayed alongside work by thirty-two of the finest Indonesian and foreign artists working in the country, ‘Perjuang Adat’ was a highlight of ART • BALI 2019: “SPECULATIVE MEMORIES” held in Nusa Dua from October 2019 to January 2020.

The imposing 600 by 400 by 250 cm wood and papier-mâché sculpture had an important, timely message. Made from sustainable items with traditional Balinese techniques that pushed the levels of materiality, ‘Pejuang Adat’ (Indigenous Warriors), was the artist’s bold call to his people. A traditional sailing vessel perched dangerously upon the crest of a wave and destined for disaster, ‘Pejuang Adat’ is a metaphor for the current plight of the Balinese society, that according to the artist, lacks in leadership and is without a strong vision for the future.

Marmar’s most recent work went on display late October 2020 at Wishingwell, an exciting new venue located near the famous surfing destination of Uluwatu. A unique art and cultural landmark for the Bukit peninsula of southern Bali, the project’s visionary is Rizal Tandjung, Indonesia’s most renowned international surfer. “The concept behind Wishingwell is to create a new youth culture and contemporary art platform. A melting pot for art, music, skating, surfing and diverse creative expression,” Rizal told me.

A fine art gallery and two-story community space for the display of two and three-dimensional artworks along with live performances, music, workshops, discussions and cultural presentations, Wishingwell combines a bar and restaurant with an ice cream parlour. The structure fuses random architectural styles with an eclectic array of recycled building materials. It is completed by vibrantly coloured murals and large-scale installations. “I have commissioned Balinese, Indonesian and international artists to make specific artworks that transform the venue into a unique aesthetic and ambient experience,” Rizal explained. At a glance, Wishingwell appears like a spaced-out, extroverted artist’s studio – a factory for mayhem and spontaneity.

‘Waruna’ Marmar’s recycled paper, rattan and bamboo installation is suspended from the ceiling on the second level of Wishingwell. It features the mythical guardian of the ocean surfing a wave. Part human part beast, the fantastic creature has a powerful upper torso and elongated octopus tentacles for legs. “I set out to make an artwork which included sustainable materials along with rubbish from the ocean,” Marmar said.

“Last year, I created an installation from plastic bottles displayed in the international departure lounge of Ngurah Rai Denpasar Airport. Designed to promote ocean environmental awareness, it features a large wave with a surfboard ideally positioned for social media photographs. I became inspired to make this work after seeing a viral Internet photo of a Balinese surfer riding a wave littered with plastic trash.”

“I am not anti-plastic,” Marmar stated. “I wish to emphasise the need for personal responsibility with regards to the use of plastic packaging. The message behind ‘Waruna’ is similar. I want to increase surfer’s and fisherman’s awareness of protecting the ocean. I was primarily motivated after hearing of the giant floating plastic trash island that has formed in the middle of the Pacific Ocean. We all need ongoing environmental education,” he said.

Marmar recycles traditional fishing nets hung from the walls and ceilings to create the form of a wave, while also reinforcing the artwork’s theme. Discarded fishing nets, he told me, are a severe ocean environmental concern. One of the nets was given to him by a fisherman who said that three generations of his family had used it. In the past nets were often repaired and remained in continual use. Nowadays, however, a damaged net is replaced by inexpensive new synthetic nets.

‘Waruna’s’ concept is also a response to an architectural feature of Wishingwell. Part of the roof has a rhythmic wave-like design and is painted with vibrant colours and traditional motifs by emerging artist Swoofone. Entitled ‘Bulan’ (moon), the lunar satellite’s orbit around the earth has an enormous impact upon the ocean tides and waves. Marmar’s compelling work may also be appreciated by the vast local and international surfing community drawn to the Uluwatu area.

The Balinese believe that there are two equal and opposing forces; a duality that is essential to maintaining balance throughout the universe. With every action, there is a corresponding opposite reaction; cause and effect. This eternal system of governance is the foundation of the sacred Balinese Hindu philosophy of Rwa Bhineda.

“If we are irresponsible with plastic it eventually enters the ocean and is destined to become an environmental disaster,” Marmar stated and then explained. “Plastic breaks down into micro-particles in the salt water which are eaten by the marine life that we later consume.” A landmark in Balinese contemporary art practices, Marmar’s installation is a representation of nature’s powerful cycles. ‘Waruna’ presides over the laws of karma and reminds us that what we give out, we will eventually receive.” 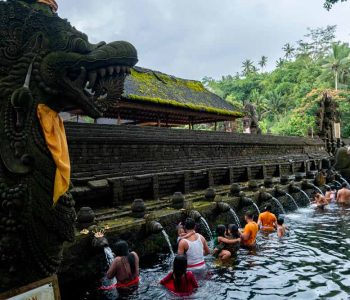 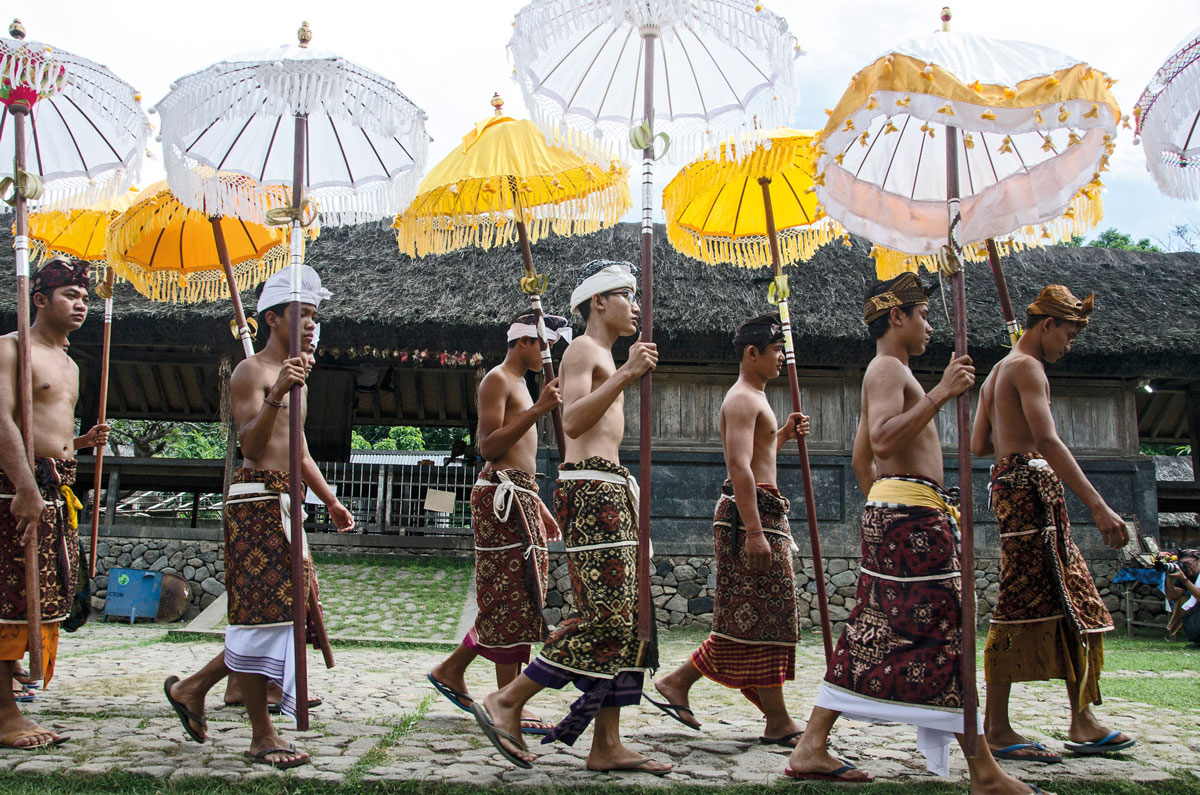 The Melting Pot of the West 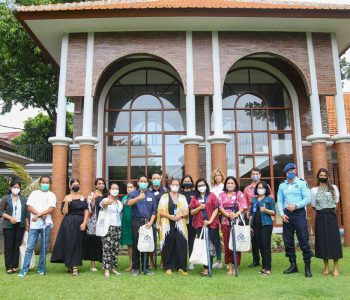