The island is host to countless dance performances; some are performed as a tourist attractions while others remain sacred and can only be performed in a temple or during a holy ceremony.

The Rejang dance can only be performed during a particular holy ceremony, such as Betara Turun Kabeh, an annual ceremony at the Besakih temple, which is considered one of the most sacred and important ceremonies in Bali. On the first day of the ceremony, the opening ritual is the Rejang Galuh, performed by a group of little girls, and followed by the Rejang Renteng, this time enacted by a group of ladies. Only those who are virgins or mothers can perform the Rejang dance, for the dance is conducted to welcome the deities and the holy spirit of their ancestors. 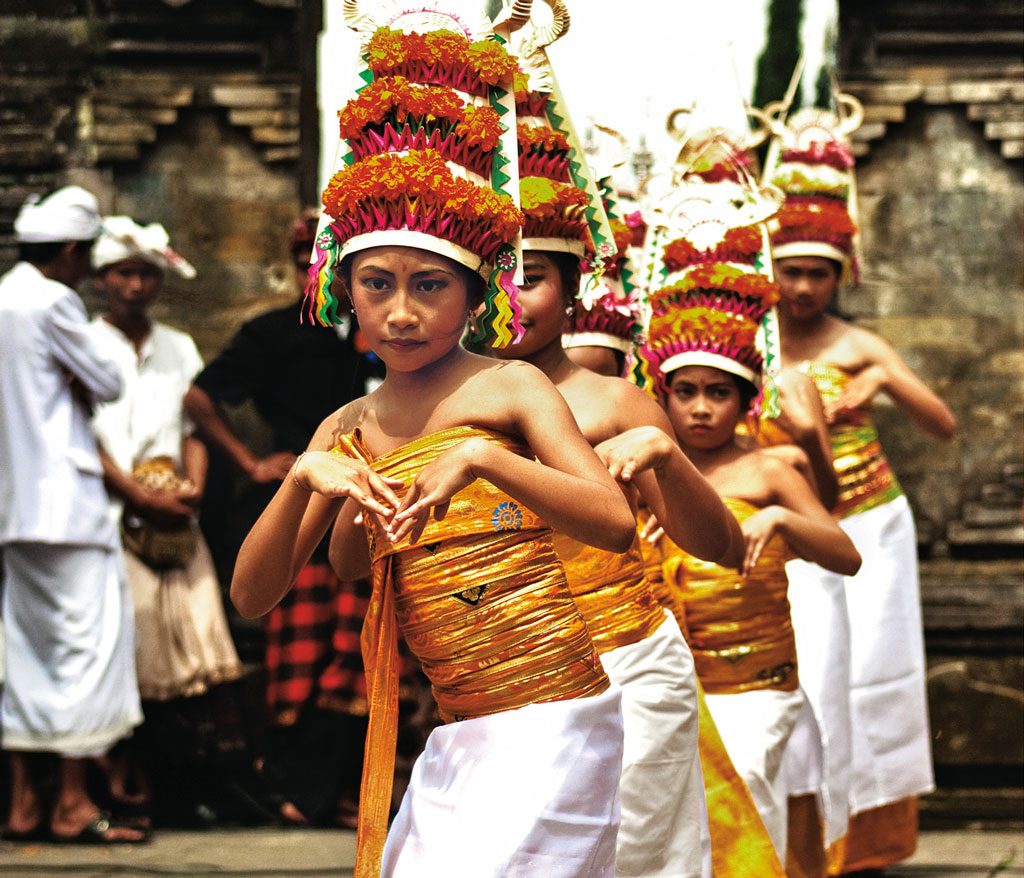 The choreography of the Rejang dance is very simple, but the dancers have to be really focused and perform the routines with a clean heart and solemn soul as the dance is sacred and performed as part of the worship to the gods and goddesses, to pay tribute for the blessings and prosperity given. The colours of the dancer’s attire represent the gods being worshipped: white is the colour of God Iswara, ruler of the East where the sun rises, and yellow is the colour of God Mahadeva, ruler of the West.

One of the island’s sacred dances, Sanghyang Jarang, is normally performed in a village temple during a ceremony, aimed to clean the invisible world that has been polluted by human sin so that an epidemic can be prevented from plaguing the village. This dance involves large numbers of people, a choir, which is as big as 20 singers or more, and a dancer who is usually a priest. 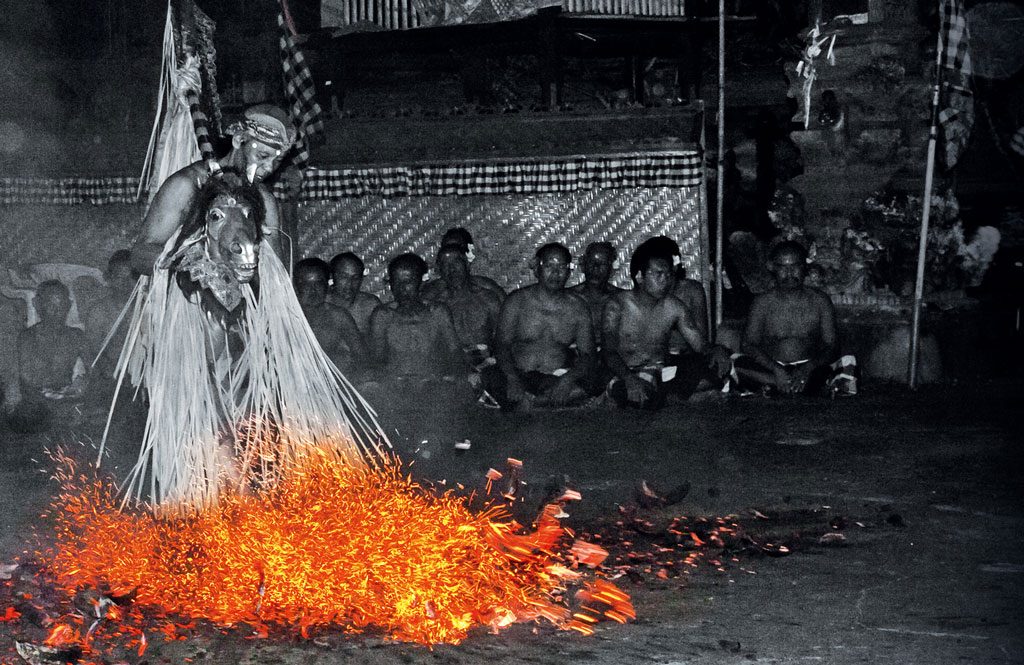 Before the performance begins, several men will light a bonfire. Then the choir will enter and sit on the ground, chanting a ballad called “Gending Sanghyang”. Amidst the quiet atmosphere and transcendental chant which is believed to usher down spirits from heaven, a man riding a hobbyhorse made from coconut leaf midrib will ride in to the middle of the choir. Barefoot and with eyes closed, the man will run into the fire and flail his body wildly on the flaming hot embers. During this stage, the man is normally possessed by the spirit of the God’s saddle horse that comes down from heaven.

Probably the most famous of all traditional Balinese dances, Kecak was composed around the 1930’s and is performed by a group of around 40 people swathed in black-and-white checkered cloth. These men will enter the performing area chanting “cak” in an organised rhythm and harmony and raise their hands to the sky while stomping their feet. They will then form a circle while imitating the sounds of the Gamelan with their voices. 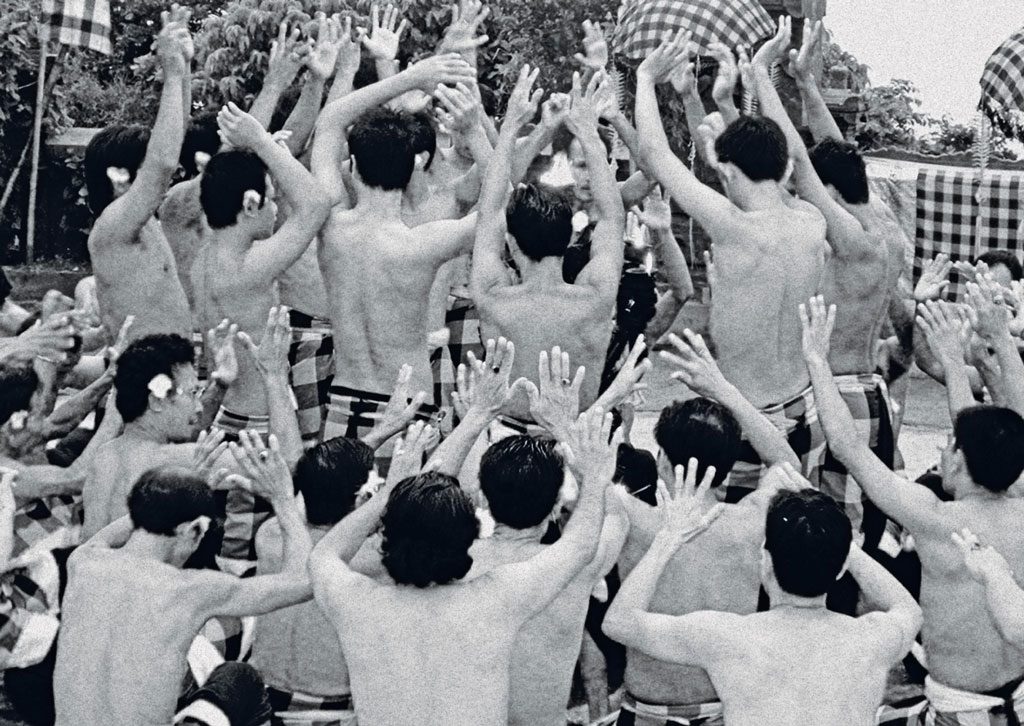 Kecak tells the story of the epic poem Ramayana; it’s about Rama, the king of Ayodhya, whom because of internal conflict in the kingdom, was sent into exile. Sita, his loyal wife, and his brother, Laksamana, insisted on following him into the forest. Then the plot of the story begins to thicken, with Rama and his entourage having interesting encounters in the forest, the kidnapping of Sita, and the battle between the king of the white monkeys and the king of the giants.

A social youth dance, Janger is performed by boys and girls. These young dancers, while performing the dance routine, will also sing, striking a unique blend of dance and choir – the boy’s choir is called Kecak, and the girl’s choir is called Janger. They sing upbeat tunes, usually flirtatious love songs. Even though the dancers provide the vocals and the movement, the Gamelan still plays an important role in creating the right ambiance for the dance. 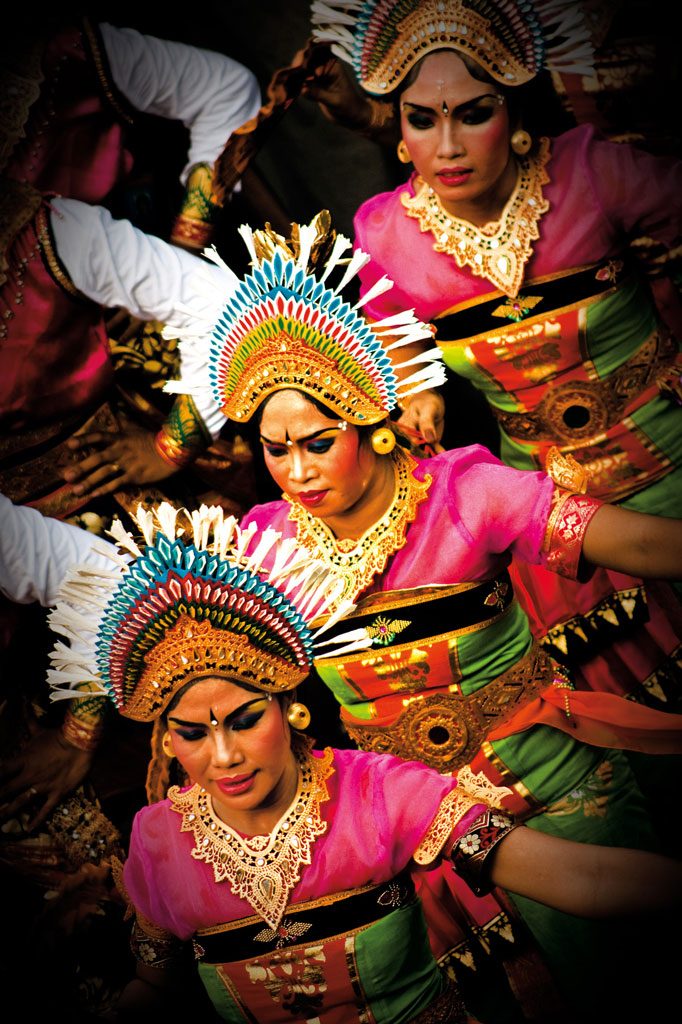 No one really knows when Janger was performed for the first time, but the popularisation of the dance is thanks to the youth choirs formed by the Banjar, the Balinese community social group system. The routine of the dance, the song and costume differ depending on the regency. In Tabanan, for instance, Janger was performed during the Dutch colonisation and tells the story of that oppressive era. In Metra village, Bangli regency, the Janger dancers are said to enter a trance during the routine. 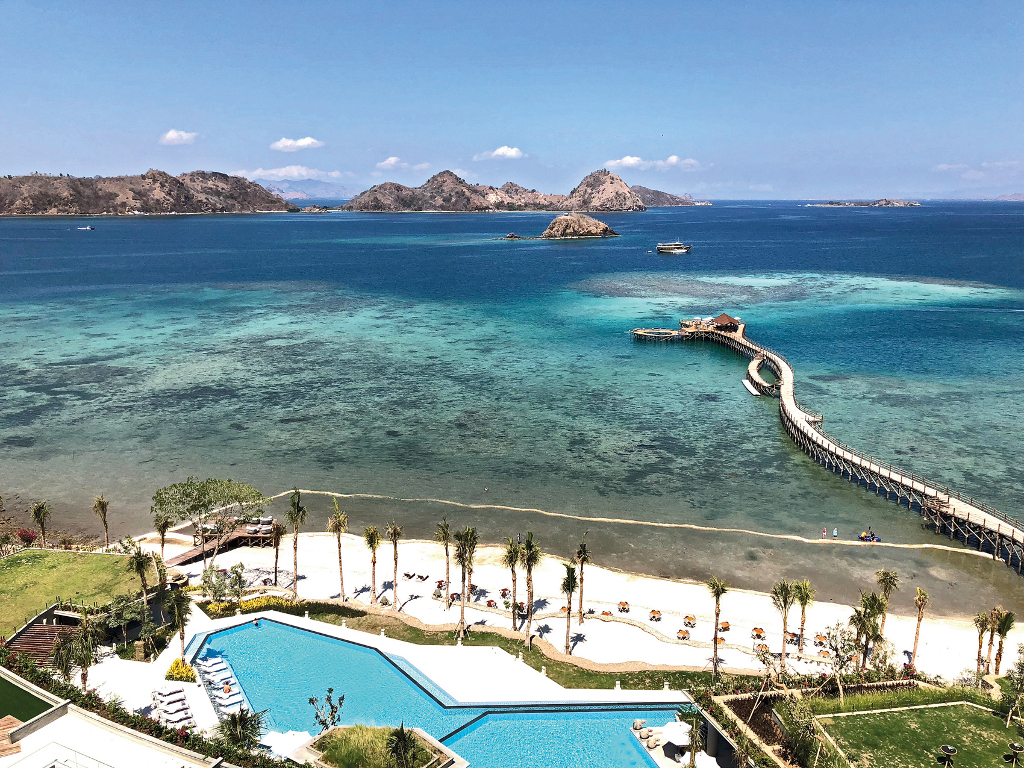 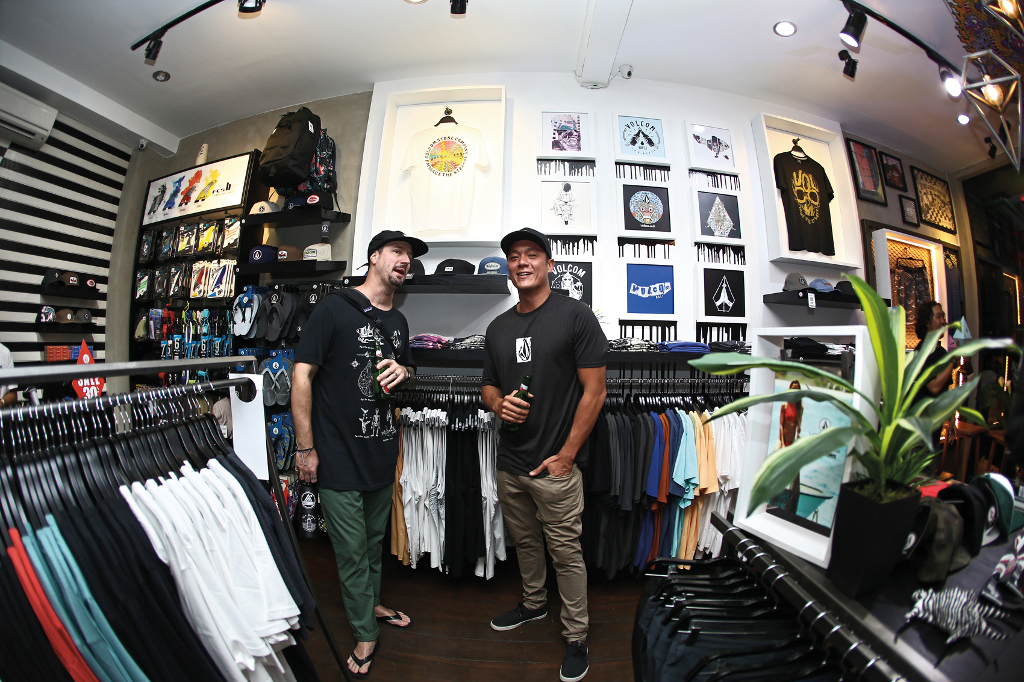 AYANA Hotels in Bali Celebrate the Magic of Festive Season