Wedged between the more popular Gianyar and Karangasem regencies, Bali’s smallest regency has long been just a thoroughfare for travellers, many simply passing through without knowing the treasures to be found here. This is Klungkung, whose size and status today do not do this regency’s history justice.

Klungkung was in fact the heart of Bali’s arts and traditions back in the 16th century, where it played a central role in cementing the Balinese culture we see today. To fully appreciate the significance of this regency, a brief look into history is required: the story really starts with the rise of the Majapahit Empire of Java, a history fatefully intertwined with Bali.

A Brief History of Klungkung

When this Javanese empire took control of Bali in 1343, a vassal state was setup in the area of Samprangan, Gianyar, with Javanese nobleman Sri Aji Kresna Kepakisan set up as its ruler. Upon passing the power on to his eldest son, an incompetent ruler, power was quickly passed to the youngest brother Ketut Dalem. The Puri (Balinese court) was moved to Gelgel, an area inside Klungkung. Here, Ketut Dalem ruled what became the Gelgel Kingdom, controlling most of Bali until the mid-17th century, giving Klungkung its power and status.

As a ‘sister kingdom’ under the Majapahit Empire, the Kingdom of Gelgel thus became a cultural centre of Bali as well, as royal courts normally do. Bali took on much of the political and cultural influences of its Javanese rulers, with everything from dance, architecture, painting, sculpting and importantly, the wayang shadow puppet theatre, being adopted among in Balinese society. As a result, many guilds of musicians, artists and craftsmen situated themselves close to the Puri, serving their king and courts dutifully when beckoned.

The Gelgel Kingdom fell apart in the 17th century and instead a new Puri was established in 1686 in Semarapura (now Klungkung’s capital). At this point, Bali had fragmented into nine different kingdoms, represented by the regencies we see today, but Klungkung remained the most revered of all having inherited the respect of its Gelgel past.  The power of the Balinese kingdoms were all but dismantled when the Dutch invaded the island in 1908, but the influence that the Gelgel and Klungkung Kingdoms had on Balinese tradition lives to this day, and traces of the historical arts and crafts can still be found in this culturally rich regency.

The most tangible and visible memory of the Klungkung Kingdom is the final remnants of the palace, known as Puri Agung Semarapura. This single compound is found at the centre of Semarapura, where its royal walls stand incongruously alongside the bustling city crossroad, as if guarding against modernity itself.

The compound, which exemplifies classical Balinese architecture, houses two original buildings from the past. Most significant is Taman Gili Kerta Gosa, the old hall of justice or the court of the high king. A single table sits at the centre of this raised pavilion, with three chairs on either side: three for the judges (often Brahmin priests) and three for the assessors. While the antique wooden table and chairs are prized items, it’s the centuries-old paintings on the hall’s ceiling that really steal the spotlight.

Stunning panels of original Kamasan style paintings decorate the ceiling of the pavilion; this was a style brought to Bali by the Majapahit Kingdom and became the principal form of visual art. The style is derived from the wayang shadow puppet theatre, the characters almost identical to those found ‘on stage’, complete with the iconic two-dimensional composition. Like the wayang shows of the past, these Kamasan paintings are narratives, telling the stories of Hindu epics from the Ramayana and the Mahabharata, or sometimes Balinese folktales too. Often a moral lesson or philosophical message is hidden within these stories, and thus royalty would commission these artworks for their palaces.

At the Kerta Gosa Pavilion, a specific message is the focus: karma. On the lower reliefs, the Kamasan paintings depict the consequences of your actions in Balinese hell, or ‘purgatory’. All manner of punishments reserved for your soul, depending on your misdeed: under the tree of daggers (punyan curiga), for example, knives shall fall upon your lip if you were a liar or will pierce your eyes if you were a peeping tom; adulterers and cheaters would have their genitals burned; corruptors are boiled in cauldrons. Those being judged and the court were likely regretting their actions upon witnessing the horrific fate that awaits their sinful soul.

Above these panels, another story unfolds. It is the heroic journey of Bhima Swarga, a story from the Mahabharata: one of the five Pandawa brothers who must rescue his parents from hell (where he witnesses the torturing of souls mentioned), and secures them a place in heaven. It is a story of heroism, but also justice and redemption.

At the centre of the palace compound sits the Bale Kembang, or floating pavilion. This large bale sits in the centre of a lotus pond, hence its name, connected by a statue-lined bridge. Here, more Kamasan paintings can be found lining the ceiling.

The Kamasan style gets its name from the village of Kamasan, also found in Klungkung, around 5-minutes drive from Kerta Gosa. It is here that the ancient painting tradition continues, keeping the style alive by passing the intricate skills down through the generations. Specifically, you’ll find them in Banjar Sangging (sangging meaning painter, decorator or tooth filer).

It is the painters from Kamasan that have for decades retained and refurbished the paintings that line the Kerta Gosa ceilings. Notable painters have been Rambug, Dogol, and Pan Seken, followed by Nyoman Mandra, all of whom made preserving the style and Kertha Gosa their lifelong mission. Walking through the village area, you will find many art studios to explore.

There is another group of craftsmen that live in the confines of Kamasan, the makers of the Balinese hollowed coins, known as either kepeng or pis bolong. The coins are made from five different elements known as Panca Datu or “five strengths of life” (iron, silver, copper, gold, and bronze). They are often used in for Balinese Hindu ceremonies, namely the cremation ceremonies – ngaben or plebon – and are also offered to the Bhuta Kala.

Originally, these coins were a Chinese import, and often the original but rare Chinese coins are still sought after for ceremonies. However, as ritual regulations stated coins could not be re-used after being part of an offering, the island experienced a scarcity of pis bolong. This led to a movement to revive the industry in Klungkung, where now home-based industries like UD Kamasan Bali produce and sell the coins for ceremonies, as well as effigies made from the coins.

Also on the roster of Klungkung’s craftsmen are the Pande Gong, quite literally the smiths of ‘gongs’, the creators of Bali’s traditional instrument, the gamelan.

Once again, this specialised guild are located in one area, Tihingan village in Klungung.  The gamelan production takes place in the villagers’ home workshops, done by both regular craftsmen and specialised experts (the Pande Gong) to set the tones of each of the instruments. A Pande Gong is an experienced music instrument craftsman, and almost all of the traditional music instruments found in Bali are made by a Pande Gong.

Every home workshop in Tihingan is open for visitors. Here you can observe the craftsmen working wood and metal, shaping the raw materials and crafting them into the final instruments before being shipped to other areas in Bali and even overseas. It could take around three months to craft a complete set of Gamelan, which normally consists of Jegogan, Jublag, Pemada, Kantil, Reong, Tawa-tawa, and Kempur.

Whilst not a legacy of the Majapahit empire, another artisan finds a home in Klungkung. On the black sand shores of the regency’s narrow coastline, in the area of Kusamba, sea salt farmers continue an age-old tradition. (Read the full story here).

Balinese sea salt is one of the lesser known produces made on the island. This artisanal salt is not being exported en masse as it continues to be farmed at a small scale, through a labour intensive process. The farmers are seen at the break of dawn, tarp-made buckets weighing across their shoulders, used to carry sea water up onto the beach. Here, they water the volcanic sand, with layers of sea water, increasing its salinity, before they filter the saline water out and leave it to dry in hollowed logs that line the beachfront. The harvesting process is similar to the Agehama salt making techniques found in Japan, notably the Noto Peninsula.

There are very few Bali sea salt farmers left on the island. Many have long given up on the trade that gives poor returns for such heavy work. From dawn to dusk, the farmers produce around 5 kilograms of salt if the sun is out, each kilogram is sold for around Rp. 20.000, but only if they’re able to sell.

In Tejakula, northeast Bali, salt farming has modernised and formalised, meaning the product will continue to have a place on the market. The farmers of Kusamba themselves urge their children to find modern work which pays better, which means this may well be the final generation of traditional sea salt farmers on the shores of Klungkung.

A great attraction in Klungkung is the Museum Nyoman Gunarsa, locally referred to as Museum Seni Lukis Klasik (museum of classical paintings), the museum is the private gallery of the late Balinese maestro Nyoman Gunarsa. Founded in 1990, the museum houses Gunarsa’s artwork collections as well as the maestro’s own classical and contemporary Balinese artworks that range from paintings, sculptures, and antique items. The museum consists of three floors. On the first floor you’ll find centuries-old classic Kamasan paintings, mostly painted by unknown artists. Gunarsa’s works can be found on the second and third floor. 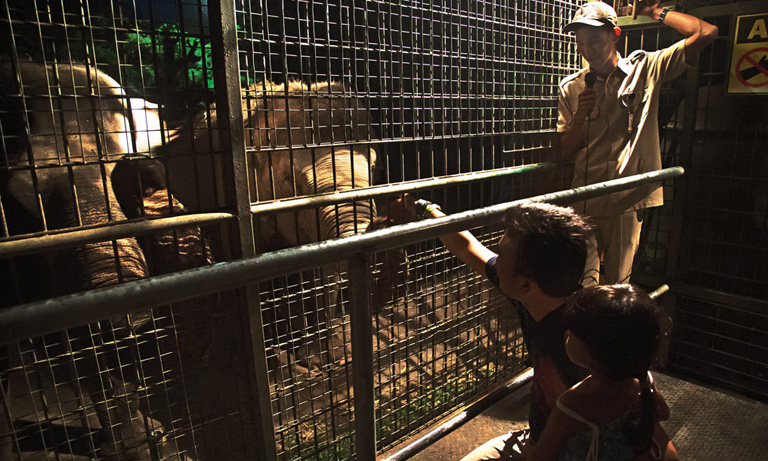 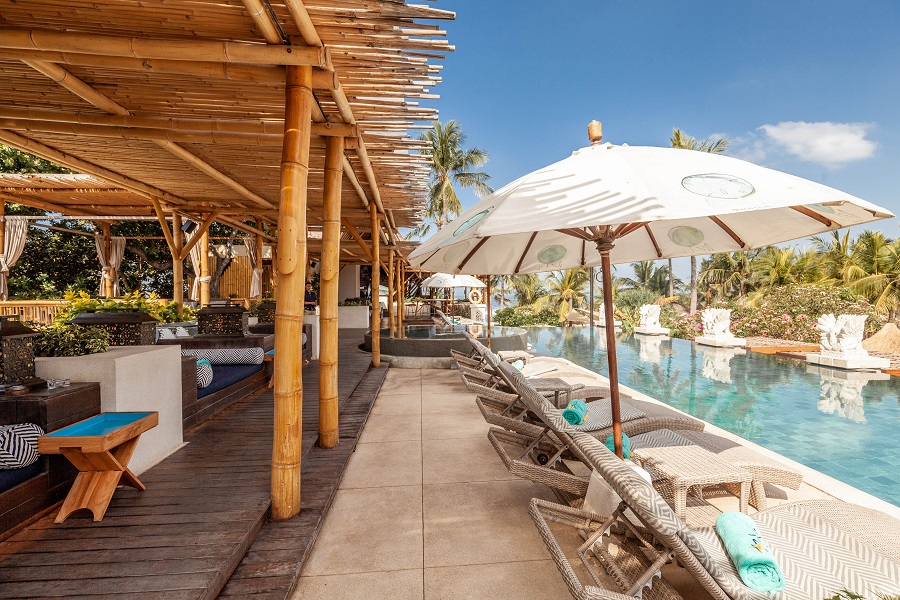 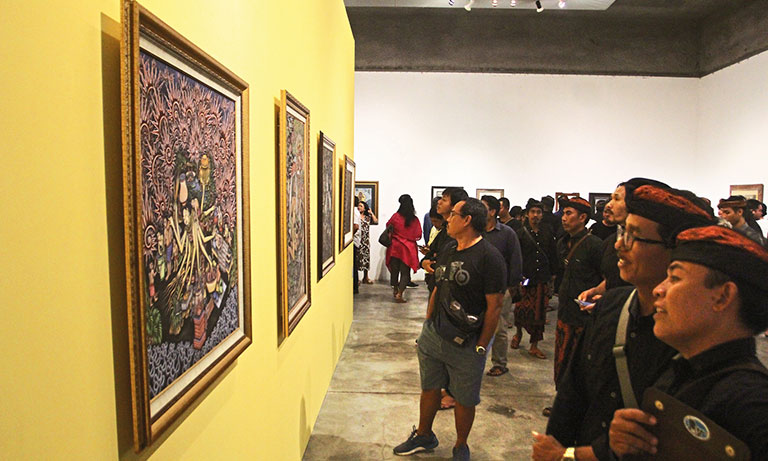 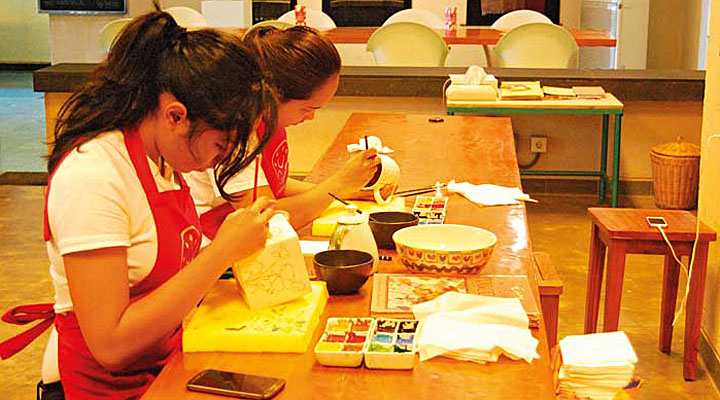 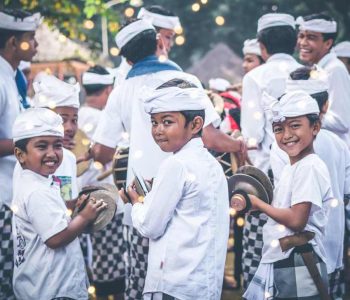